Following the winding coastal road to Deia on the way to Lynne Frank’s hilltop home, it was almost impossible not to build a mental image of the woman I was about to meet. As I passed the terraces of the Tramuntana mountains lined with ancient olive trees, dodged a coach overhanging the road’s edge and looked out to the sweep of calm azure sea below, I envisioned a formidable business woman with a big personality. Franks, after all, founded her first public relations company at her kitchen table in 1970, when she was 21. By the time she sold it in 1992, it had become one of the most successful and well-known agencies in the world. Without Lynne Franks, PR as we know it today, wouldn’t exist and without her media persona, nor would the long running comedy ‘Absolutely Fabulous’ for which she was reputedly the inspiration for the lead role of ‘Edina.’

With a client list that has included international brands such as The Body Shop and Coca Cola, pop stars such as Diana Ross and The Spice Girls and fashion designers such as Gloria Vanderbilt and John Galliano, her reputation as someone who makes things happen certainly preceeds her. Yet in 2004, in her book ‘Grow – The Modern Woman’s Handbook’ Franks wrote candidly about the «major burn-out» she suffered at Lynne Franks PR. «I was so committed to proving myself in a man’s world that I made work my number one priority» she reveals, before charting the detrimental effects. So as I turned off the mountain road and up through a steep gravelled drive, I was eager to ask Lynne about the journey she’s made from working at the forefront of a man’s world, to devoting her time to working with and empowering women. And how that personal journey has taken her from bustling London to bohemian Deia.

«I didn’t have anything in mind when I came here first» Lynne tells me «Just rest, having sold my business». Dressed in a t-shirt and flowing skirt, she’s far from the suited, serious business woman I’d expected. She speaks at a rapid pace and imparts information with accuracy, authority and warmth. She first came to Mallorca to visit friends fifteen years ago and it was when she took a trip to see friend and fashion designer Katherine Hammnet that she first drove back down the coast through Deia. «I didn’t know it was Deia, I didn’t know what it was, but I fell in love with it, who wouldn’t?

Franks bought a 500 year old cottage set high into a mountain with a spectacular view of the coast-line below. «This house has meant different things at different parts of my life for me, whether it’s a full time home or a part time home, or a retreat to get sane in, it’s always here» she tells me. But it’s not just because of its’ natural beauty that this house is a special place, as Lynne explains. «This was the first place in Deia where people lived and it was a very early monastery. Homes in Mallorca are often built on ancient sacred spaces. For me, Mallorca has a huge amount of ancient sacred feminine energy. It’s no surprise that Robert Graves lived here; with his attraction and philosophy around the ‘white goddess’ …the White Goddess as a book inspired a lot of the women’s movement, so it’s quite interesting, as I am now involved in women’s empowerment and leadership, to have a home in Deia.» 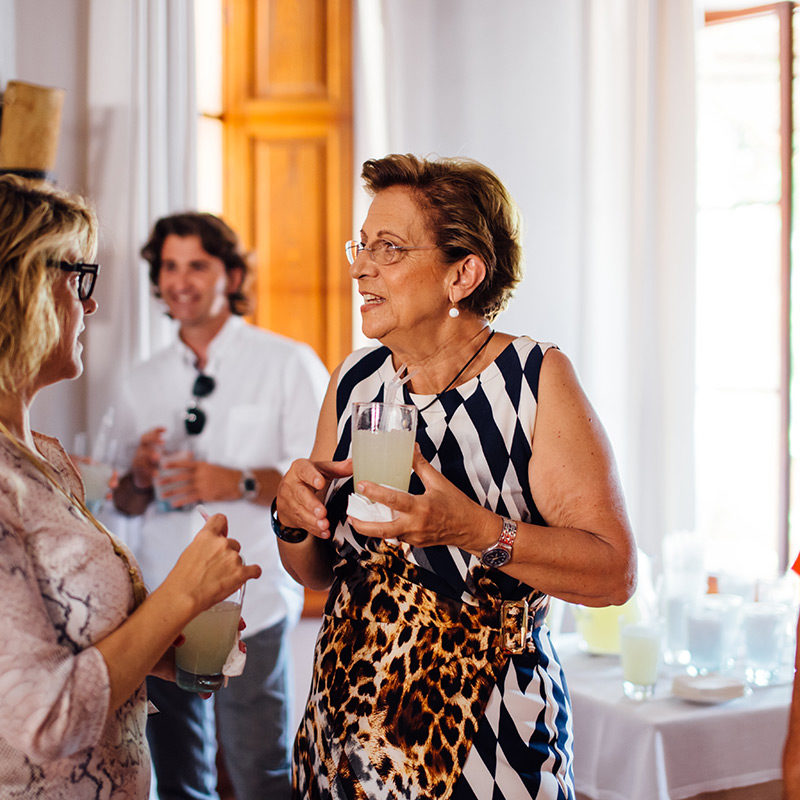 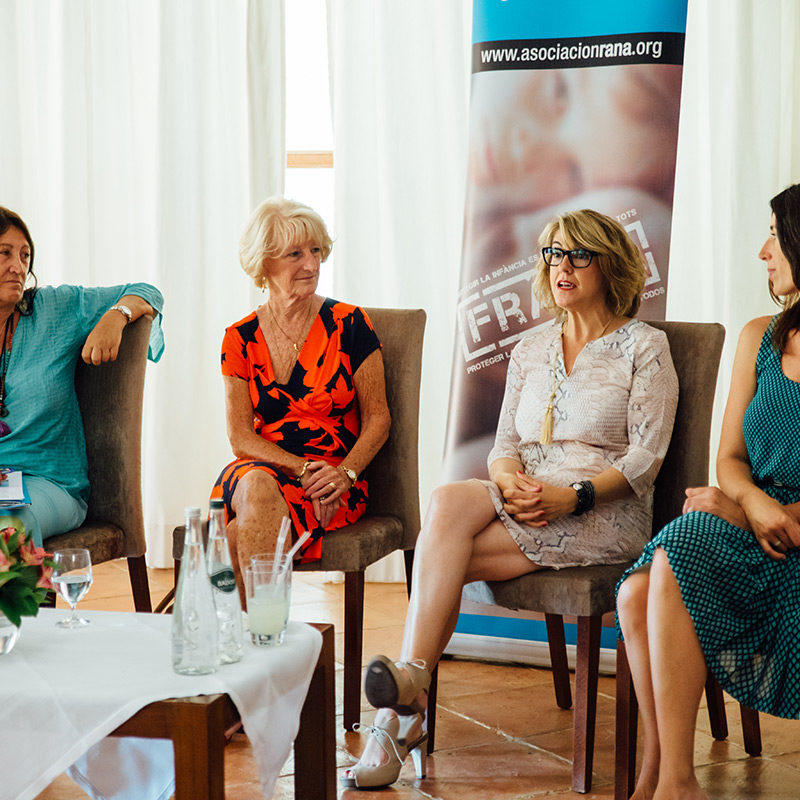 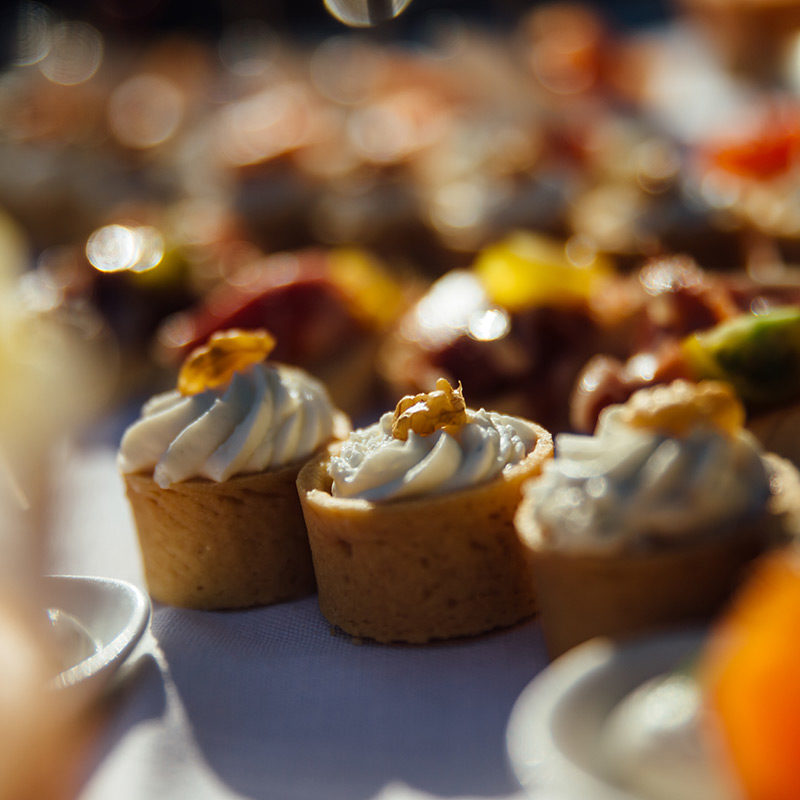 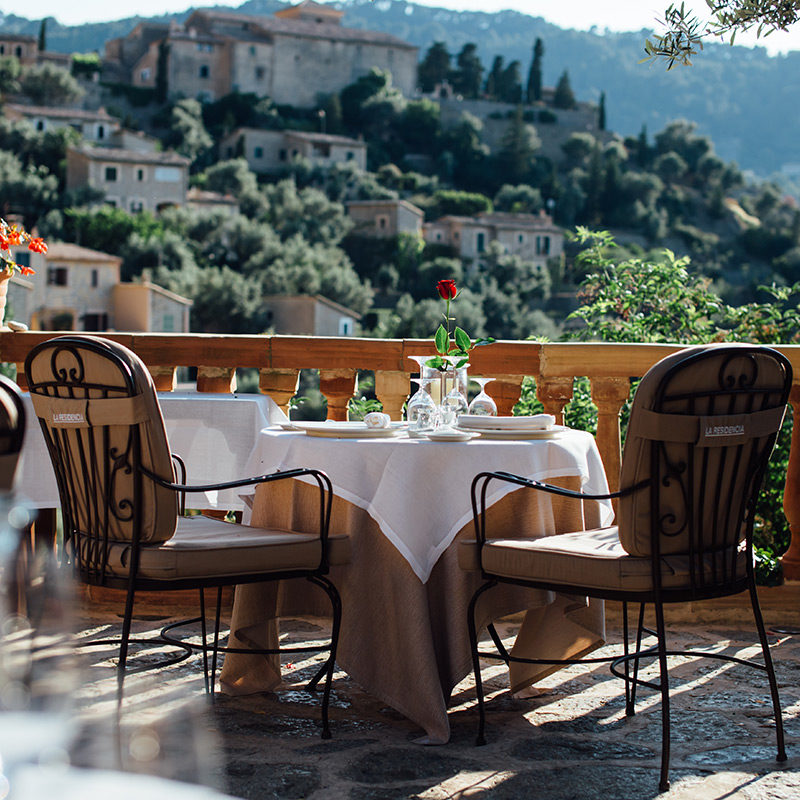 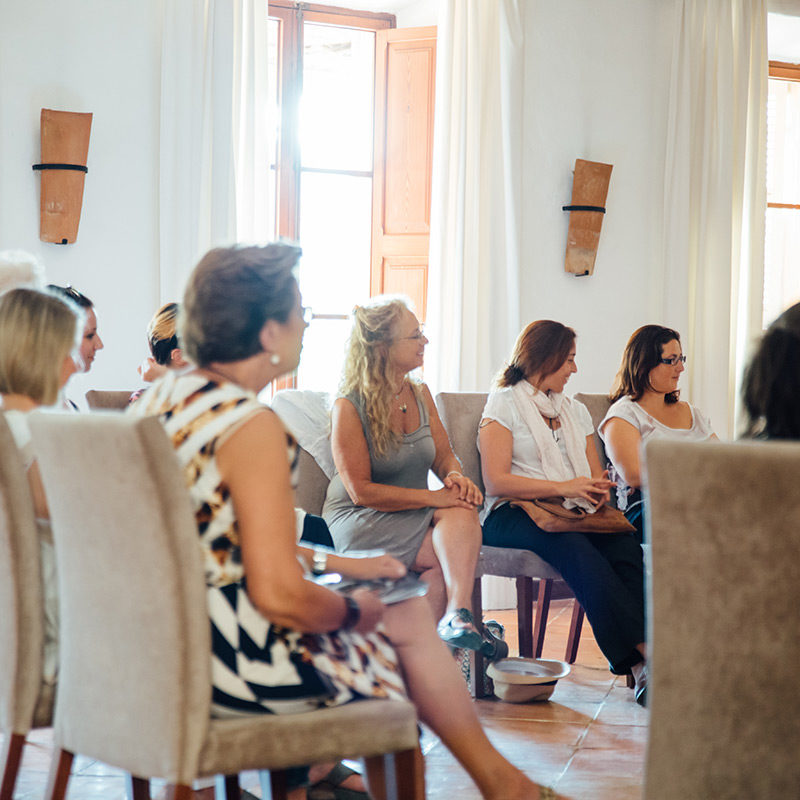 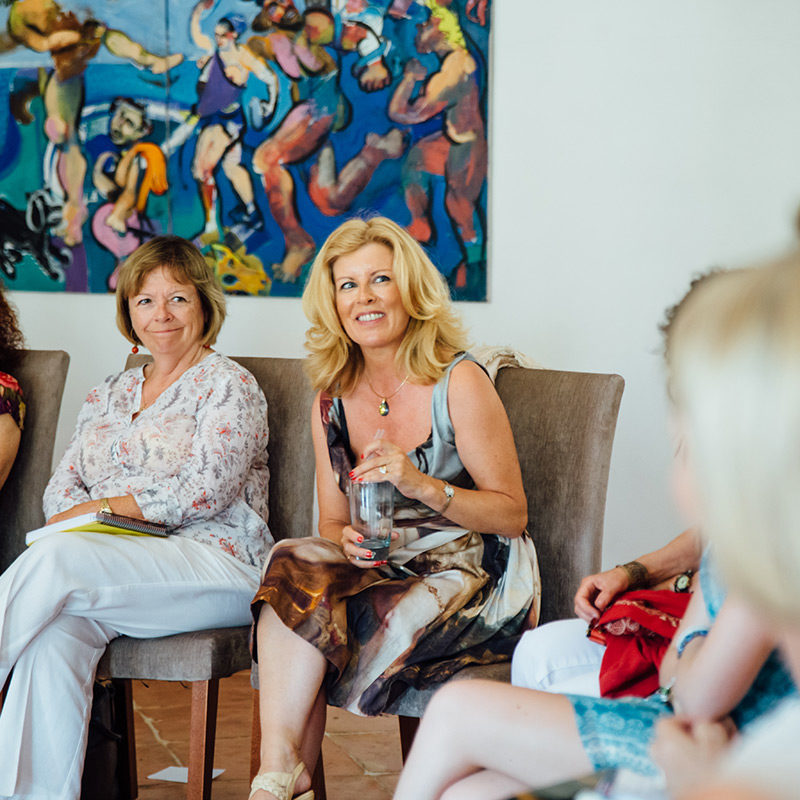 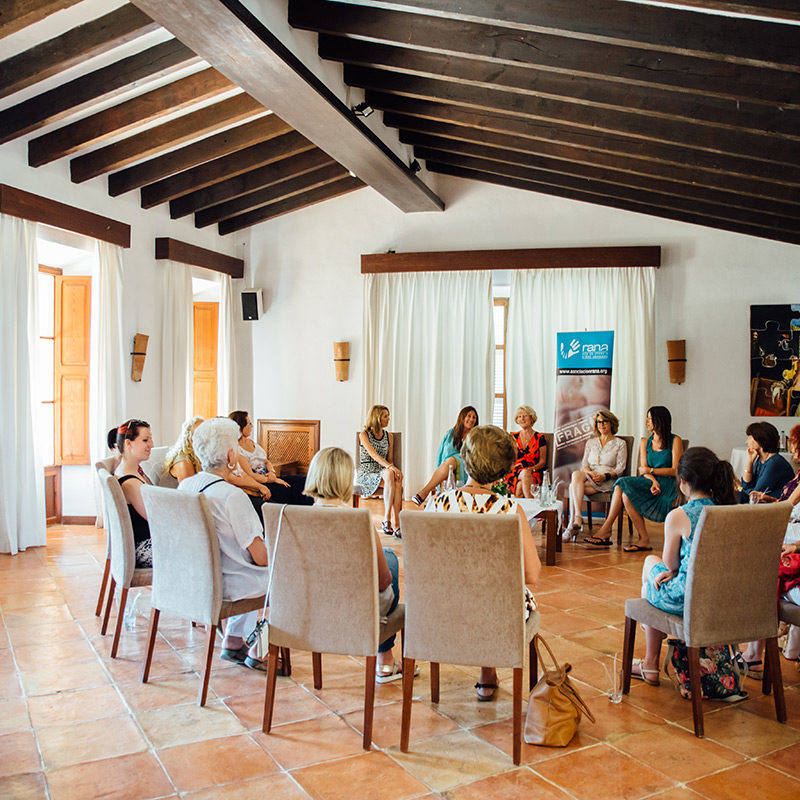 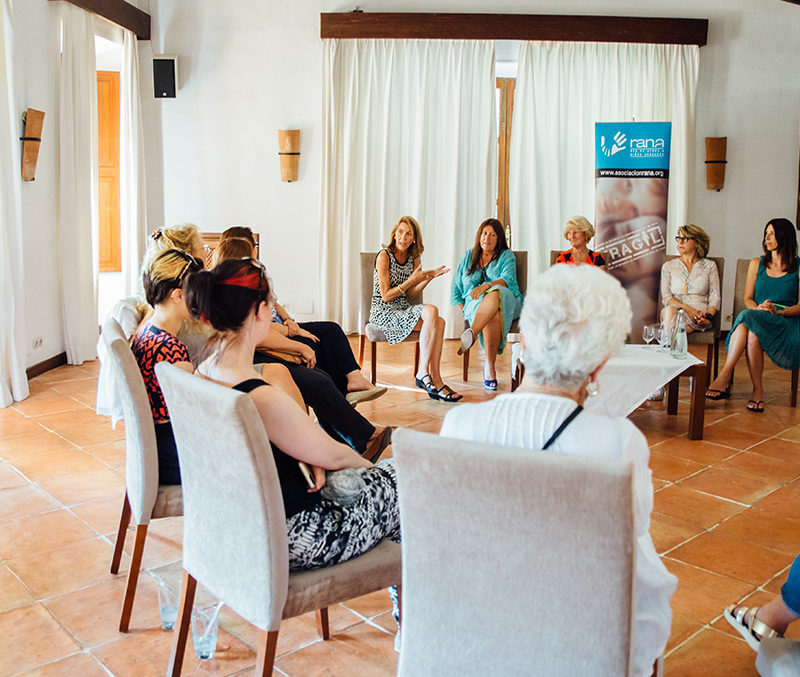 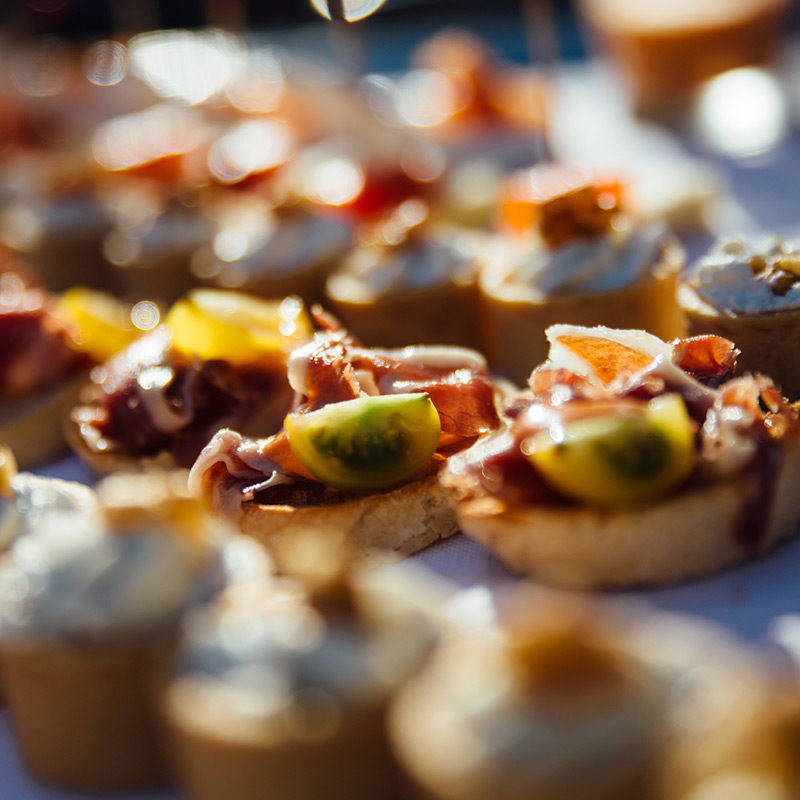 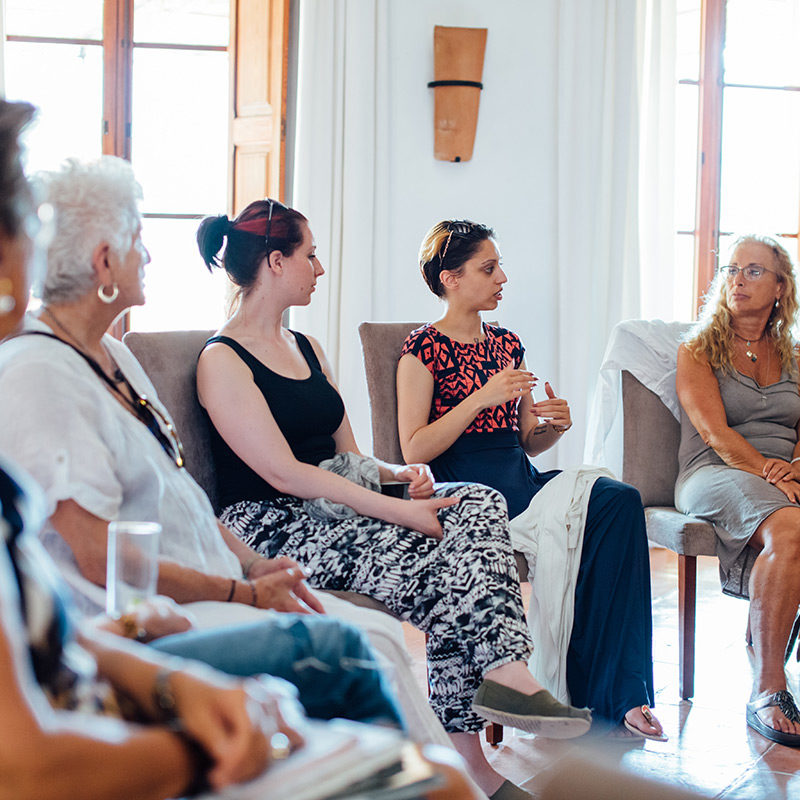 It might be surprising to hear a renowned business woman speak about feminine energy, but Lynne was actively involved in women’s initiatives even before she finished working in the PR business. «I became chair of a women’s radio station in London, that really introduced me to the idea of the women’s movement, women’s politics. I went to Beijing to the women’s conference in ‘95 and I started realising what was going on for women.» Frank’s then lived in California for five years, where she wrote ‘The Seed Handbook – The Feminine Way To Create Business’ in 2000. On the back of its’ success she created various sophisticated learning programmes for women in the US and the UK. She also set up ‘Seed Cirlces’ – networks to provide support groups and mentoring and ‘Seed Coaches’ were trained to support women in their various projects. Lynne also holds retreats for women at her Deia home and running alongside all of these local meetings, ‘Seed’ also has a presence on the net. «We’ve tied up with I-Village and we’re starting on-line workshops this September and we’ll be bringing people back into Seed Circles.» Her vision for this project, is huge, «a global network» but with roots firmly grounded in Mallorca.

«I’m very keen on Mallorca becoming the centre of a major woman’s event in two or three years time, and I have started work on it» Lynne reveals. She speaks of ‘World Woman’s Week’ as an event which would focus on wellbeing (in the form of yoga and massage) culture (the creation of a women’s film festival, a women’s literary festival) and empowerment «bringing women’s leaders in from NGOs from all over the word.»

For Franks, Mallorca seems like the natural home for this event. «There are so many amazing women living here on the island who could help get this together. I can see the English speaking community leading with it, but I think there are talents from all the different communities to make it happen. And I’d love the Queen of Spain to be the patron.»

She sees the fact that there now so many alternative therapists, centres and retreats in Mallorca as «very, very good news» not least for the project. «More and more people are discovering Mallorca as a resource and a place for these things… That whole side of wellbeing, holistic, spiritual pathway for the island is quite a natural one.» And of course it helps that people are realising how «international Mallorca is, how beautiful it is, how accessible it is.»

You can’t help but believe that Franks will make ‘World Woman’s Week’ work, but where will she start? The project «needs leadership and it needs funding» she tells me, «I cant do it alone.» But «I always felt that the PR agency was a training for something bigger, that I was going to end up doing eventually.»

So it seems that Lynne hasn’t lost her passion for making things happen, it’s her focus that has changed and the personal journey she has taken has definitely had an impact. «Coming here was part of a spiritual journey and I had a lot of shifts, personal shifts go on here. I go out into the world and meet different spiritual teachers, have extraordinary experiences and come back here and reflect… it’s stopped being a retreat here for me at the moment because it’s such a busy period… but there is time for everything.» That includes travelling around all of the British festivals this summer with her family in a camper van and the launch of her new book.

«Bloom – A Woman’s Journal For Inspired Living», written by Lynne Franks, is published by Chronicle Books, June 2007 and is available in shops and on www.amazon.com 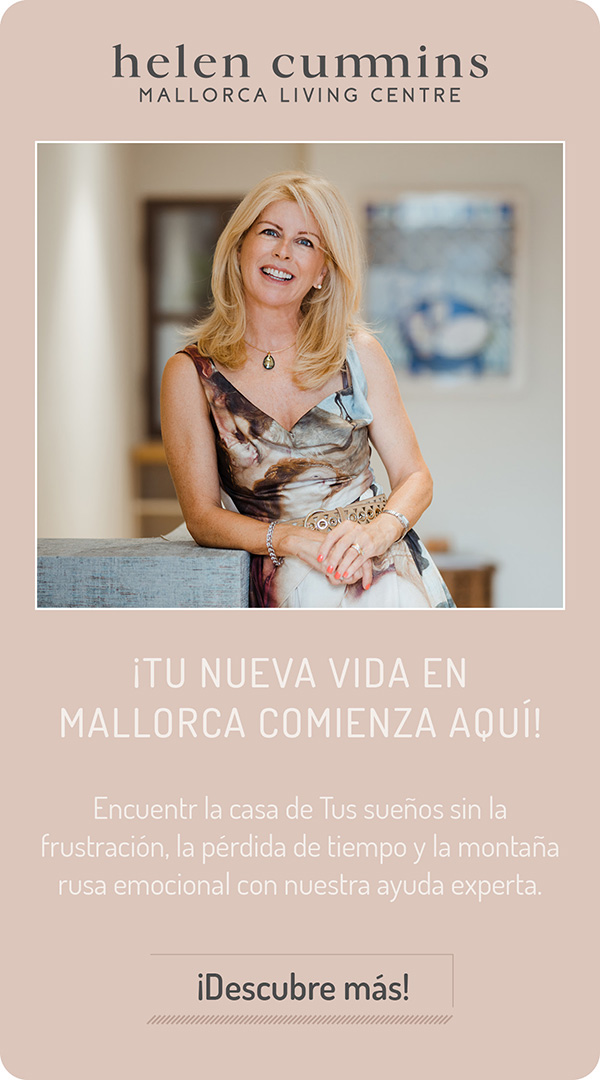